China is the odd man out in the transition from archery to musketry. Almost every other nation had given up archery for firearms, the Chinese still used large numbers of archers as late as the 19th century. While firearms were certainly not unknown in China, and muskets made up a significant portion of the Qing dynasty military, the Manchus did not use firearms themselves. The Manchus (called Tartars by the west) were a nomadic people, similar to the Mongols, who had conquered the Ming dynasty in the 17th century. They fought primarily on horseback and their favorite weapons were the saber and bow.

I have wondered for a long time why the Manchus preferred to leave the most effective weapons in the hands of their Chinese subjects. Part of it is certainly that China had no serious external threats that would require a shake-up of military traditions to deal with. Wheellock and flintlock weapons were not widely available in China, those sorts of weapons being far more convenient for use on horseback than matchlocks, but that had not stopped the nearby Mongols and Tibetans from adopting the matchlock for use on horseback. Another clue comes from this account from the first Opium war: 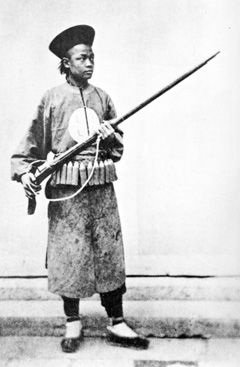 It is well known that the bow and arrow is the favourite weapon of the Tartar troops, upon the dexterous use of which they set the highest claim to military distinction. The spear also, of various forms and fashions, is a favourite weapon both of Tartars and Chinese ; but the matchlock, which in all respects very nearly resembles some of the old European weapons of the same name, except that the bore is generally somewhat smaller, is of much more modern introduction, and by no means so much in favour with the Chinese ; this is occasioned principally by the danger arising from the use of the powder, in the careless way in which they carry it. They have a pouch in front, fastened round the body, and the powder is contained loose in a certain number of little tubes inside the pouch, not rolled up like our cartridges. Of course, every soldier has to carry a match or port fire to ignite the powder in the matchlock when loaded. Hence, when a poor fellow is wounded and falls, the powder, which is apt to run out of his pouch over his clothes, is very likely to be ignited by his own match, and in this way he may either be blown up at once, or else his clothes may be set on fire : indeed, it is not impossible that the match itself may be sufficient to produce this effect. At Chuenpee, many bodies were found after the action, not only scorched, but completely burnt, evidently from the ignition of the powder.

In one of the latest encounters during the war, at Chapoo, where a few of the Tartars defended themselves so desperately in a house in which they had taken refuge, they were seen stripping themselves altogether, in order to escape the effect of the fire upon their combustible clothes when the building was in flames; and many other instances of a similar kind were noticed during the war.

So it seems that the Manchus may have left firearms to the Chinese because they didn’t want to burst into flames. Yet the superiority of the musket to the bow was demonstrated:

On this occasion one of the Chinese officers, with cool determination and a steady aim, deliberately discharged four arrows from his bow at Captain Hall, fortunately without effect. Had they been musket-balls, however, he could scarcely have escaped. A marine instantly raised his musket at the less fortunate Chinese officer : the aim was unerring, and he fell. An attempt was first made to save him for his coolness and courage ; but in the heat of an engagement it is impossible to control every man, nor is it probable that the officer would have allowed himself to be taken prisoner.

And the Manchus seem to have realized that their bows weren’t having the desired effect:

The strength of the Chinese army was estimated at from seven to eight thousand men, part of which appeared to be a picked body, said to belong to the Emperor’s guard ; they were fine, athletic, powerful men. It was also remarked that their arms were of a superior kind ; several improvements had been adopted; and the bow and arrow, once the favourite weapon of the Tartar soldier, had been laid aside on this occasion.