A follow-up the earlier fire arrow post. Nathanael Nye’s 1670 book “A Treatise of Artificiall Fire-Works for War and Recreation” contains another recipe. The illustration demonstrates naval use, but the description makes clear that it is also intended to be used against individuals. 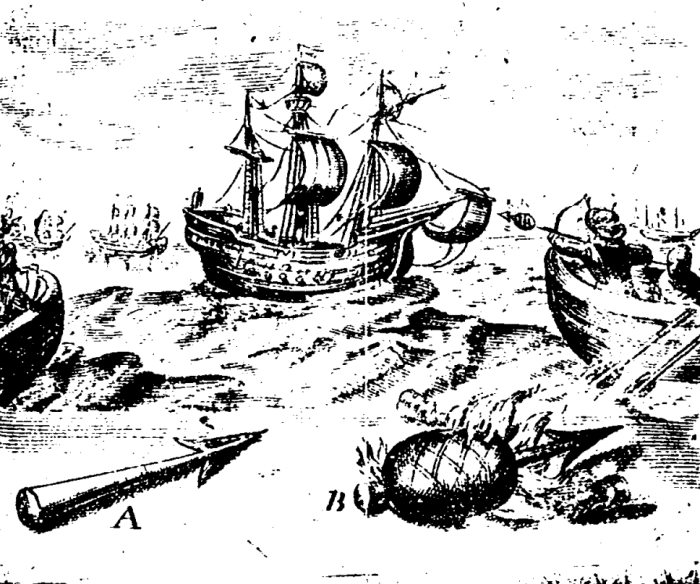 Get a long shaft of wood ; and joyne unto it an iron head, after the manner of the figure in the margen; and about the middle of that head make first a linnen bag, in form of an Egg, leaving open at the end before a hole, that it may be fitted with the composition following. Take one pound of [salt]Peter, half a pound of Gun-powder, and as much Brimstone in powder, all these ingredients being well mixed, and mingled with oyle of Petrioll : with these fill the bag round about the arrow head : then let all be bound about with wire, and for the priming of these, dip Cotton-week into Gunpowder wet with water, let the Cotton be well dried again before it be applyed. Now for the joyning of your wooden shaft to the arrow head, it ought to be done so slightly, that being fastened into any thing, those may be deceived, and pull it onely away, & to hinder that one may not pluck out the head with their hands there may be made a small hole quite thorow backwards, and so a man will be prevented in assaying to pull it off, although it stick in his fellows clothes.

Not sure what “oyle of Petrioll” is, unless Nye means petroleum. The “cotton-week” probably means cotton wick. Again, not sure why the wick should be cotton. Nye’s matchcord recipe calls for hemp or tow.