On his third voyage in 1615, Samuel Champlain again came to the aid of his native allies against an Iroquois fort. Battle was joined on the 10th of October, in what is now Madison County, New York. Champlain ordered the construction of two siege engines for the assault. The first was a tower, taller than the walls of the fort, which was carried withing a “pike’s length” of the palisade and allowed the harquebusiers to shoot down from cover. The Japanese had used similar towers during their sieges in the Imjin War, but it seems that there the towers were placed outside of arrow range rather than close the walls. The second engine was a mantlet which would allow the attackers to set fire to the walls while protected from arrows, stones and water. Champlain’s allies, lacking the discipline to follow his orders or even those of their own captains, abandoned the mantlet as soon as the battle began, preferring to rain arrows uselessly into the fort. While Champlain had been constructing the siege engines, the Iroquois had reinforced their walls so that the harquebuzes could not pierce them.

The next day, at three o’clock in the afternoon, we arrived before the fort of their enemies, where the savages made some skirmishes with each other, although our design was not to disclose ourselves until the next day, which however the impatience of our savages would not permit, both on account of their desire to see fire opened upon their enemies, and also that they might rescue some of their own men who had become too closely engaged and were hotly pressed. Then I approached the enemy, and although I had only a few men, yet we showed them what they had never seen nor heard before; for, as soon as they saw us and heard the arquebus shots and the balls whizzing in their ears, they withdrew speedily to their fort, carrying the dead and wounded in this charge. We also withdrew to our main body, with five or six wounded, one of whom died.

This done, we withdrew to the distance of cannon range, out of sight of the enemy, but contrary to my advice and to what they had promised me. This moved me to address them very rough and angry words in order to incite them to do their duty, foreseeing that if everything should go according to their whim and the guidance of their council, their utter ruin would be the result. Nevertheless I did not fail to send to them and propose means which they should use in order to get possession of their enemies.

These were, to make with certain kinds of wood a cavalier* which should be higher than the palisades. Upon this were to be placed four or five of our arquebusiers, who should keep up a constant fire over their palisades and galleries, which were well provided with stones, and by this means dislodge the enemy who might attack us from their galleries. Meanwhile orders were to be given to procure boards for making a sort of mantelet** to protect our men from the arrows and stones of which the savages generally make use. These instruments, namely the cavalier and mantelets, were capable of being carried by a large number of men. One mantelet was so constructed that the water could not extinguish the fire, which might be set to the fort, under cover of the arquebusiers, who were doing their duty on the cavalier. In this manner, I told them, we might be able to defend ourselves so that the enemy could not approach to extinguish the fire which we should set to their ramparts.

This proposition they thought good and very seasonable, and immediately proceeded to carry it out as I directed. In fact the next day they set to work, some to cut wood, others to gather it, for building and equipping the cavalier and mantelets. The work was promptly executed and in less than four hours, although the amount of wood they had collected for burning against the ramparts, in order to set fire to them, was very small. Their expectation was that the five hundred men who had promised to come would do so on this day, but doubt was felt about them, since they had not appeared at the rendezvous, as they had been charged to do, and as they had promised. This greatly troubled our savages; but seeing that they were sufficiently numerous to take the fort without other assistance, and thinking for my part that delay, if not in all things at least in many, is prejudicial, I urged them to attack it, representing to them that the enemy, having become aware of their force and our arms, which pierced whatever was proof against arrows, had begun to barricade themselves and cover themselves with strong pieces of wood, with which they were well provided and their village filled. I told them that the least delay was the best, since the enemy had already strengthened themselves very much; for their village was enclosed by four good palisades, which were made of great pieces of wood, interlaced with each other, with an opening of not more than half a foot between two, and which were thirty feet high, with galleries after the manner of a parapet, which they had furnished with double pieces of wood that were proof against our arquebus shots. Moreover it was near a pond where the water was abundant, and was well supplied with gutters, placed between each pair of palisades, to throw out water, which they had also under cover inside, in order to extinguish fire. Now this is the character of their fortifications and defences, which are much stronger than the villages of the Attigouautan and others. 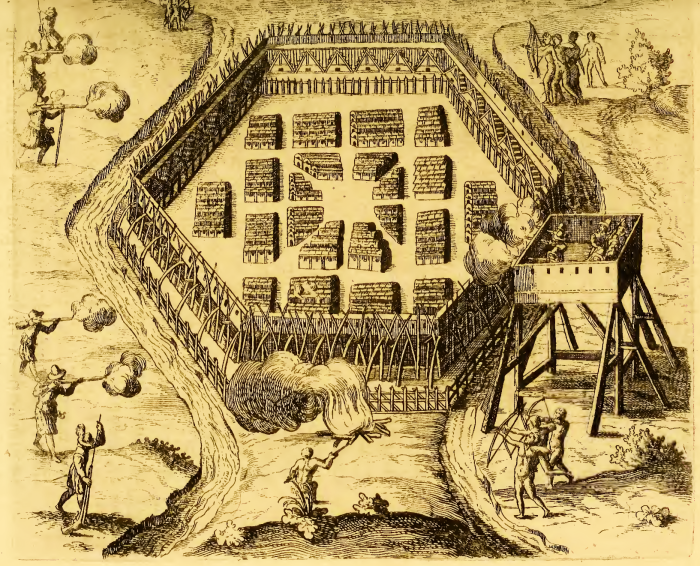 We approached to attack the village, our cavalier being carried by two hundred of the strongest men, who put it down before the village at a pike’s length off. I ordered three arquebusiers to mount upon it, who were well protected from the arrows and stones that could be shot or hurled at them. Meanwhile the enemy did not fail to send a large number of arrows which did not miss, and a great many stones, which they hurled from their palisades. Nevertheless a hot fire of arquebusiers forced them to dislodge and abandon their galleries, in consequence of the cavalier which uncovered them, they not venturing to show themselves, but fighting under shelter. Now when the cavalier was carried forward, instead of bringing up the mantelets according to order, including that one under cover of which we were to set the fire, they abandoned them and began to scream at their enemies, shooting arrows into the fort, which in my opinion did little harm to the enemy.

But we must excuse them, for they are not warriors, and besides will have no discipline nor correction, and will do only what they please. Accordingly one of them set fire inconsiderately to the wood placed against the fort of the enemy, quite the wrong was and in the face of the wind, so that it produced no effect.

This fire being out, the greater part of the savages began to carry wood against the palisades, but in so small quantity that the fire could have no great effect. Tehre also arose such disorder among them that one could not understand another, which greatly troubled me. In vain did I shout in their ears and remonstrate to my utmost with them as to the danger to which they exposed themselves by their bad behavior, but on account of the great noise they made they heard nothing. Seeing that shouting would only burst my head, and that my remonstrances were useless for putting a stop to the disorder, I did nothing more, but determined together with my men to do what we could, and fire upon such as we could see.

Meanwhile the enemy profited by our disorder to get water and pour it so abundantly that you would have said brooks were flowing through their spouts, the result of which was that the fire was instantly extinguished, while they did not cease shooting their arrows, which fell upon us like hail. But the men on the cavalier killed and maimed many. We were engaged in this combat about three hours, in which two of our chiefs and leading warriors were wounded, namely, one called Ochateguain and another Orani, together with some fifteen common warriors. The others, seeing their men and some of the chiefs wounded, now began to talk of a retreat without farther fighting, in expectation of the five hundred men, whose arrival could not be much delayed. Thus they retreated, a disorderly rabble.

Moreover the chiefs have in fact no absolute control over their men, who are governed by their own will and follow their own fancy, which is the cause of their disorder and the ruin of all their undertakings; for, having determined upon anything with their leaders, it needs only the whim of a villain, or nothing at all, to lead them to break it off and form a new plan. Thus there is no concert of action among them, as can be seen by this expedition.

Now we withdrew into our fort, I having received two arrow wounds, one in the leg, the other in the knee, which caused me great inconvenience, aside from the severe pain. When they were all assembled, I addressed them some words of remonstrance on the disorder that had occurred. But all I said availed nothing, and had no effect upon them. They replied that many of their men had been wounded, like myself, so that it would cause the others much trouble and inconvenience to carry them as they retreated, and that it was not possible to return again against their enemies, as I told them it was their duty to do….
We remained in camp until the 16th of the month, during which time there were some skirmishes between the enemy and our men, who were very often surrounded by the former, rather through their imprudence than from lack of courage; for I assure you that every time we went to the charge it was necessary for us to go and disengage them from the crowd, since they could only retreat under cover of our arquebusiers, whom the enemy greatly dreaded and feared; for as soon as they perceived any one of the arquebusiers they withdrew speedily, saying in a persuasive manner that we should not interfere in their combats, and that their enemies had very little courage to require us to assist them, with many other words of like tenor, in order to prevail upon us…

…They proceeded to make a kind of basket for carrying the wounded, who are put into it crowded up in a heap, being bound and pinioned in such a manner that it is as impossible for them to move as for an infant in its swaddling clothes; but this is not without causing the wounded much extreme pain. This I can say with truth from my own experience, having been carried some days, since I could not stand up, particularly on account of an arrow-wound which I had received in the knee. I never found myself such a gehenna as during this time, for the pain which I suffered in consequence of the wound in my knee was nothing in comparison with that which I endured while I was carried bound and pinioned on the back of one of our savages; so that I lost my patience, and as soon as I could sustain myself, go t out of this prison, or rather gehenna.