I picked up Mike Loades’ new book War Bows after it was recently reviewed by Matt Easton on his Youtube channel scholagladiatoria. Easton remarked that the book, a four-part survey of the English longbow, crossbow, composite bow and Japanese Yumi, is based on the latest scholarship.

I find the book a mixed bag. To some degree, Loades’ does push back against pop culture myths, such at the image of archers launching accurate arrow storms from their 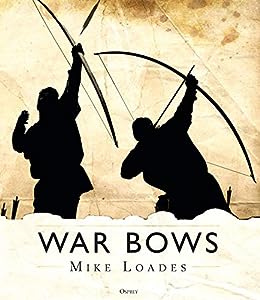 maximum range. Loades proposes that archers did not often waste their ammunition in this way, but instead tended to shoot at a fairly close range, “at ranges of 50yd and closing”. I’m relieved that this is not yet another book that portrays the bow and arrow as invincible super-weapons (especially longbows), and agree with most of Loades’ analysis of the use and tactical effectiveness of archery. There is much that is good here.

Unfortunately, when it comes to a comparison of firearms and bows, there’s very little. All that Loades has to say on the replacement of the bow by firearms amounts to about half a page of his 311 page book. Worse, what Loades does have to say on this topic amounts to a rehash of the same tired cliches. I’ve quoted the section in full below, with some comments interspaced (pg 87):

As the 16th century gave way to the 17th, the longbow disappeared entirely from military use. The English victories over the Scots at Flodden (1513) and Pinkie Cleugh (1547) were the last major land battles in which it played a significant part, and Drake’s voyages saw its final use at sea. Gunpowder weapons got better, though the longbow still had many advantages and, over the years, its many ardent proponents.

Longbow proponents were at their most fervent around the time of the Spanish armada (1588), when firearms had all but replaced bows in military service already. Their argument was not that bows should be used instead of firearms, but simply that the bow still had a place on the late 16th-century battlefield at all. Detractors of the longbow derided it as either fit only for service when no firearms were available, or useless, or worse than useless. I’ve compiled an exhaustive list of publications put out by both sides of the debate, many of which are available to read for free. Loades only mentions one of these publications:

In 1625, prior to the English Civil War, William Neade proposed a system of training men with a bow-and-pike combination. His ‘double-armed man’ had a pike strapped to his bow, creating a defensive hedge against cavalry while allowing the same man to be an active shooter. Charles I was a supporter of the scheme and it had some initial traction before being eclipsed by the onset of war.

Neade’s bow-pike saw little, if any, battlefield use, despite Charles I’s efforts to implement the weapon. Pikemen with bows were apparently not much more useful than pikemen without them. 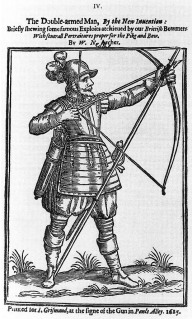 In 1798, with the threat of an invasion of Britain by French forces under Napoleon, another British military tactician, R.O. Mason, wrote a tract called Pro Aris et Focis, which was illustrated with various drill exercises for the archer/pikeman. Mason, too, argued that the bow was a superior weapon to the musket.

Reviewing my research notes from four years ago, I see that I’ve encountered Mason’s tract before, but didn’t find it very interesting. The musings of a man who had never seen a bow used in combat is less useful than the many recorded experiences of men who did.

However, perhaps the most articulate advocate for the reintroduction of the military longbow was Benjamin Franklin, though his recommendations ran contrary to the military thinking of the times; was there was an adequate national resource of bowyers, fletchers, or trained bowmen.

Veterans of the French and Indian war would have perhaps have countered that although the natives of the American continent had no shortage of bowyers, fletchers, or trained bowmen, they nonetheless preferred to use muskets when they had access to them.

Nevertheless, in a letter to General Charles Lee in 1776, at the outset of the American Revolutionary War, Franklin proposed that longbows be standard issue for the Continental Army. His idea was prompted by a shortage of gunpowder, but he set out an argument that remained as true then as it had been the day the world shook to the first gunshot. Among his most important points were the facts that ‘an archer can discharge four arrows in the time of charging and discharging one bullet’ and ‘that his object is not taken from his view by the smoke of his own side’ (Franklin 1882: 170). I can do no better than close this brief study with another quotation from Franklin. He wrote that longbows were ‘good weapons, not wisely laid aside’ (Franklin 1882: 170).

It should be stressed that Franklin was not suggesting that bows should have displaced muskets, or were overall more effective weapons, but that bows were a possible solution to the severe gunpowder shortage faced by the colonial forces. The colonies had lost the battle of Bunker Hill due to a gunpowder shortage. Over a century and a half earlier, the explorer John Smith advised that prospective colonists to the New World equip themselves with bows as back-up weapons in case a fire destroyed their supply of gunpowder.

This is the end of Loades’ half-page on the extinction of military archery. I’m disappointed. Loades mentions the “English victories over the Scots at Flodden (1513) and Pinkie Cleugh (1547)”, but does not mention the use of archery by rebels against loyalist harquebusiers during the peasant rebellions of 1549. Neither does he mention the victory of Blaise de Montluc’s harquebusiers over a larger force of English longbowmen in 1545. Crécy and Agincourt are famous victories of the longbow, but Loades could have mentioned a couple of other significant battles of The Hundred Years’ War which marked the ascendancy of firearms. The Hundred Years’ War ended in 1453 with the slaughter of thousands of English soldiers by French guns at Castillon, demonstrating that firearms were just as capable of holding a defensive position as longbows. Perhaps more more capable, as demonstrated by the Battle of Formigny (1450). English archers, outranged and bombarded by French artillery, were forced to leave their entrenched hill. Although the English forces successfully charged and captured the French guns, without their defensive works the English were flanked and defeated.

Loades makes only a few more references to firearms in War Bows, and unfortunately parrots, rather than challenges, the conventional wisdom:

The arquebus required considerably less training than the bow, which was its chief advantage. [pg 275]

Period sources agree that the chief advantages of the harquebus were its greater power, range, ability to shoot unexposed from cover and the terror it inspired in its targets. I have never seen easy training mentioned in period sources as an advantage of firearms. Indeed, I’ve found the opposite: bows are considered the weapons of untrained men and the need for the thorough, “perfect” training of musketeers is stated again and again. I’ve written more on the issue of training here.

Early firearms were not always reliable, especially in wet or windy weather. As well as greater reliability, the longbow had greater range and, in skilled hands, accuracy. [pg 76-77]

I have written before that I have never found a period source claiming that bows had a longer range than firearms. The issue of accuracy is more complicated, but there are quite a few period sources which claim that firearms are more accurate (General Qi Jiguang of China, who had extensive battlefield experience with both weapons, claimed that harquebuses were five times more accurate than bows).

But I have to be charitable to Loades and acknowledge the context of this quote, which was the incorporation of longbows into the army of Maximilian I (d. 1519). Most of the period sources I’ve found which state that firearms outranged bows date from the 1540’s and later. Jehan de Montesiler was able to kill from beyond bow range with his gun at the siege of Orlean (1429), but firearms terminology from the 1400’s is so imprecise it’s unclear if his gun was handheld, full-sized artillery, or somewhere in between.

Nonetheless, it’s odd that Loades should assert that bows had a longer range and greater accuracy than firearms. Loades has tested these weapons against each other before, with the harquebuse the clear victor.

This is certainly no rigorous scientific test, but the results basically match what we see in the primary sources. Two bows, two crossbows, and two firearms are tested against three suits of armor at 20, 40, and 60 yards. The two bows are a “short bow”, whatever that is, and Loades’ own long bow. One of the crossbows is drawn with a crannequin and the other with a windlass. The firearms are a very small “hand cannon”, which Loades dates to 1450, and a harquebuse dated 1550 (Loades calls this a “musket”, but in the 1550’s a musket was a much larger and heavier gun than the one shown in the video). The bows and crossbows are unable to penetrate the armor at any range, but at 20 and 40 yards are accurate enough to hit the unarmored faces of the dummies, given a few tries. The hand cannon penetrates the armor at 20 yards but couldn’t hit at 40 yards- not surprising given how tiny it is (most of the handcannons I’ve seen from this period are larger, often significantly) and how awkwardly the gunner holds the weapon. None of the bows or crossbows are effective at 60 yards, but the harquebuse hits square-on and leaves an enormous hole.

Perhaps Loades simply has more interest in bows at their zenith rather than at their decline. But it would be useful to his analysis if he better understood why they were abandoned.